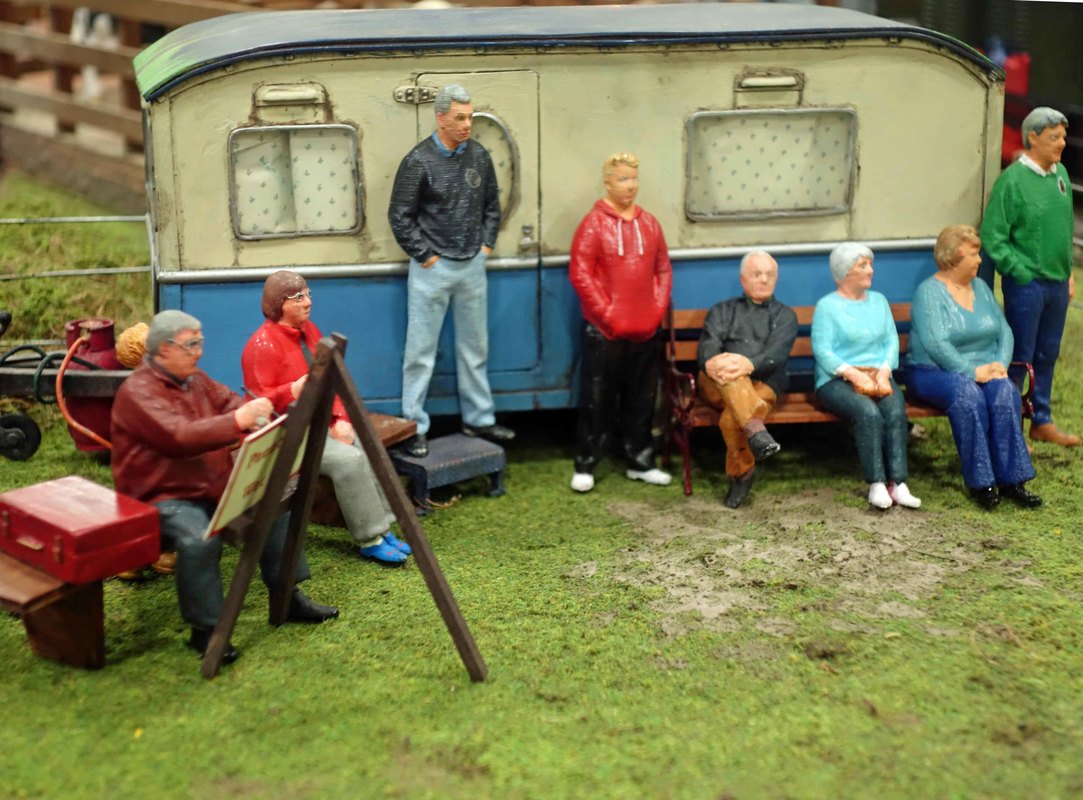 ​NANT MAWR LIVE STEAM LAYOUT
Huddersfield Railway Modellers
So what real locations are modelled on Nant Mawr?
The Ffestiniog Railway's Portmadoc Harbour station in the late 1950's is the starting point.  There are five lines instead of six, but it's a reasonable likeness. Then out along The Cob, shortened to less than three metres, comes the first 'somersault of imagination'. Instead of curving left towards Minffordd, the line goes straight ahead through the (vanished) Boston Lodge Works, and into the Aberglaslyn Pass in the days of the Welsh Highland Railway. We storm through the short tunnels of the pass to disappear under a small slate quarry into the non-scenic section, where lies the fiddle yard. The yard has four stock roads and one central return road. Locomotives can run onto a large turntable, turn around and run back onto their trains. A three-way stub point forms the fiddle yard throat. Then, passing under a road bridge, we enter the Lynton & Barnstaple Railway's Woody Bay station. Leaving its yard we cross on to the main engineering feature of the Talyllyn Railway, Dolgoch Viaduct which is modelled at exact scale and takes up a full section. Once clear of the viaduct we enter the 1950's back streets of Welshpool during the dying days of the Welshpool & Llanfair Light Railway. Finally we round the last curve to re-enter Portmadoc, from the sea, as it were, to complete the circuit. Now do you understand what I meant by the need to accept compromise and somersaults of imagination?
We started building in July 1998 enabling members to run trains on the continuous but unfinished track bed two days before the end of the 20th Century. Track and point-work was built in-house. Further steady progress followed so that by the summer of 2004, Nant Mawr, complete with appropriate scenery,  was selected to be the only model railway layout exhibited at the NRM Rail Bicentenary (1804-2004) Gala at York.  Over nine days members ran the layout, ably supported by visiting 16mm Association members from across the UK. Later, Nant Mawr attended several club exhibitions and other shows but due to its size and weight this has recently become more limited.
Locomotives belonging to members are mainly commercially built.  Exhibition operation of Nant Mawr is a whole new world for those moving up from smaller scales. With live-steam you do not have unlimited supplies of fuel or water. Running sessions are usually timed to 30 minutes, including five minutes concurrent with the driver ahead and five minutes at the end with the next driver. This is the usual duration of the loco's butane gas tank, which in turn is designed to empty before a full boiler of water is used up. Having to gas-up or replenish water on the main line is frowned upon, but sometimes necessary when events elsewhere on the line cause unscheduled stops.
Rolling Stock.  In the early days this was largely scratch built, often of true prototypes. As interest in the scale has grown so has the number of traders offering self-assembly kits, both freelance and prototypical. The recent development of laser cutting and 3D printing has certainly impacted and now many off-the-shelf   items are available, if the pocket will stretch to them.
Today, the layout normally remains fully erected in the clubrooms available, ready to run on and still the core of activity and enjoyment of our hobby. 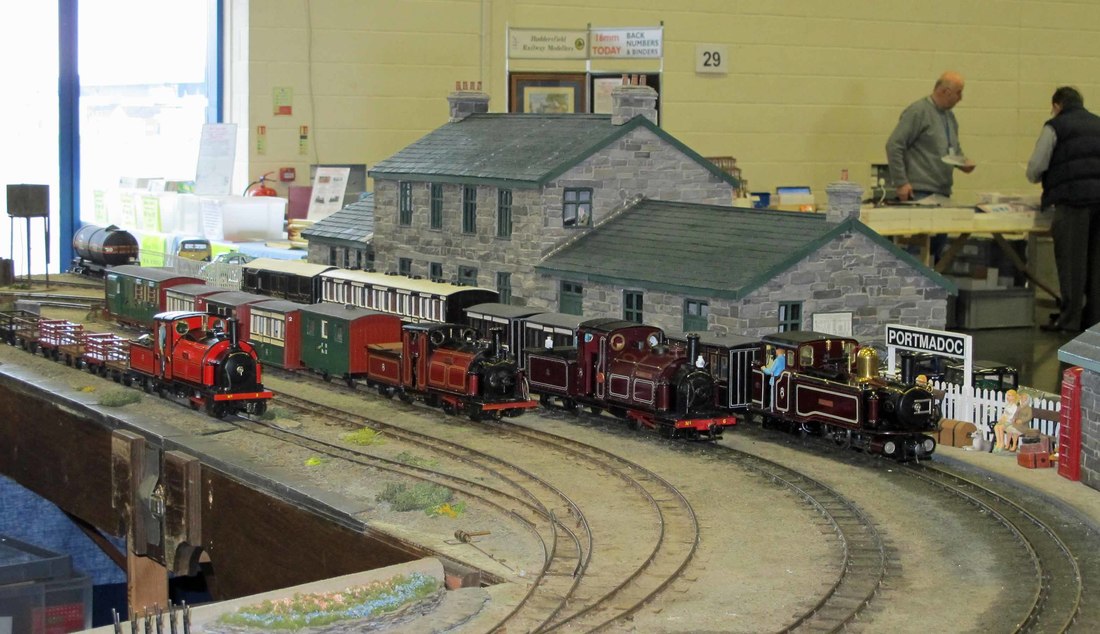 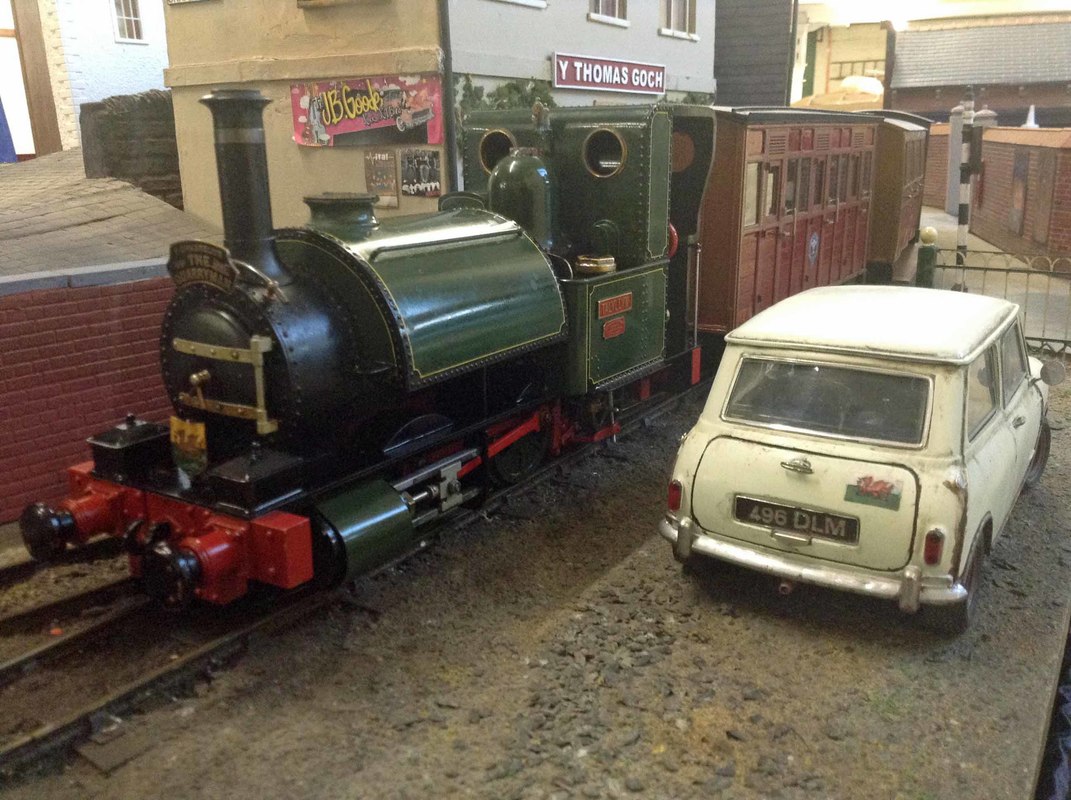 The Dingle Branch
Having constructed a reliable layout in Nant Mawr, members thoughts once again turned to their next project. In 2004 the club moved its base from Meltham, having located and adapted much more spacious premises in Milnsbridge.  Provision had always been built into Nant Mawr's Woody Bay corner to construct a connection to an extension. Thoughts therefore turned this way. A couple of members had seen a fine smaller gauge layout of the Dingle Station area on the Tralee and Dingle Railway in Ireland. This proved to be the inspiration for the next project. Creating a branch line off the main Nant Mawr layout was an attractive idea, so research followed. There was good scenery potential - loads of open countryside, including Lispole Viaduct, carrying the line into Dingle Station. Also, in addition to the usual station platforms, there was a Goods Shed, Cattle Dock and a locomotive turntable. The real line also went beyond Dingle Station originally to a harbour. Overall there was lots of branch operating potential. Decision made.
Construction of the Dingle Phase 1 commenced with the building of three full and 1 half-length baseboards. The original intent was to attach and operate the Dingle branch from Nant Mawr, so the first baseboard of the branch would attach to it near Woody Bay.  Elegant design resulted in two options for the rest of the branch to be built-in, to aid flexibility - (i) the branch could either continue in a linear direction adding another 21ft to Nant Mawr's overall length or (ii) the rest of the branch could join onto the first board but at a right angle - see the diagrams to clarify. 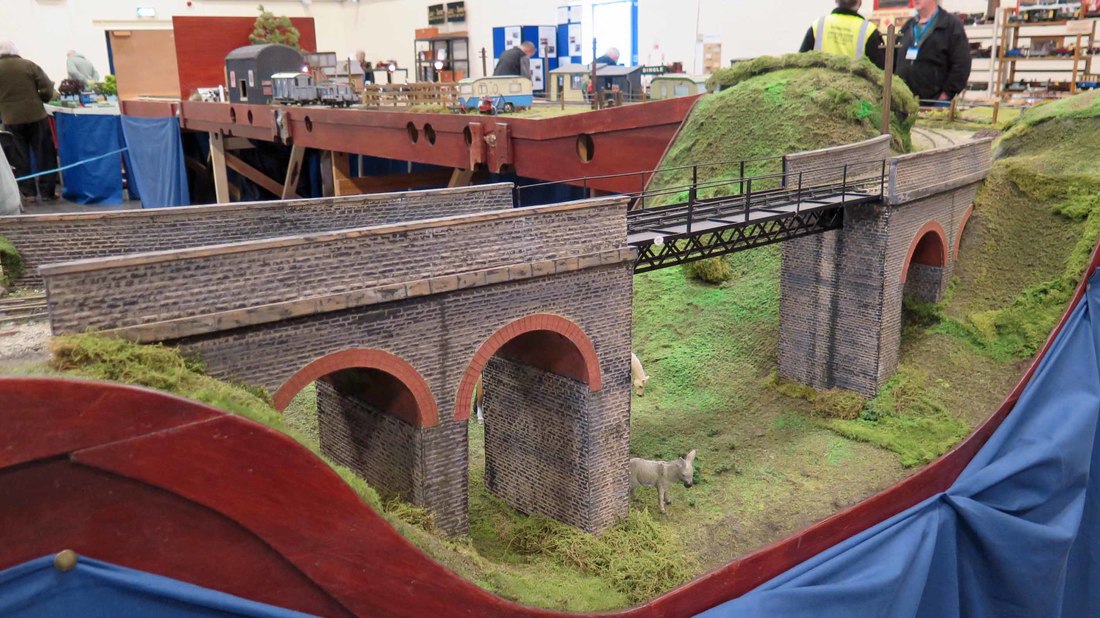 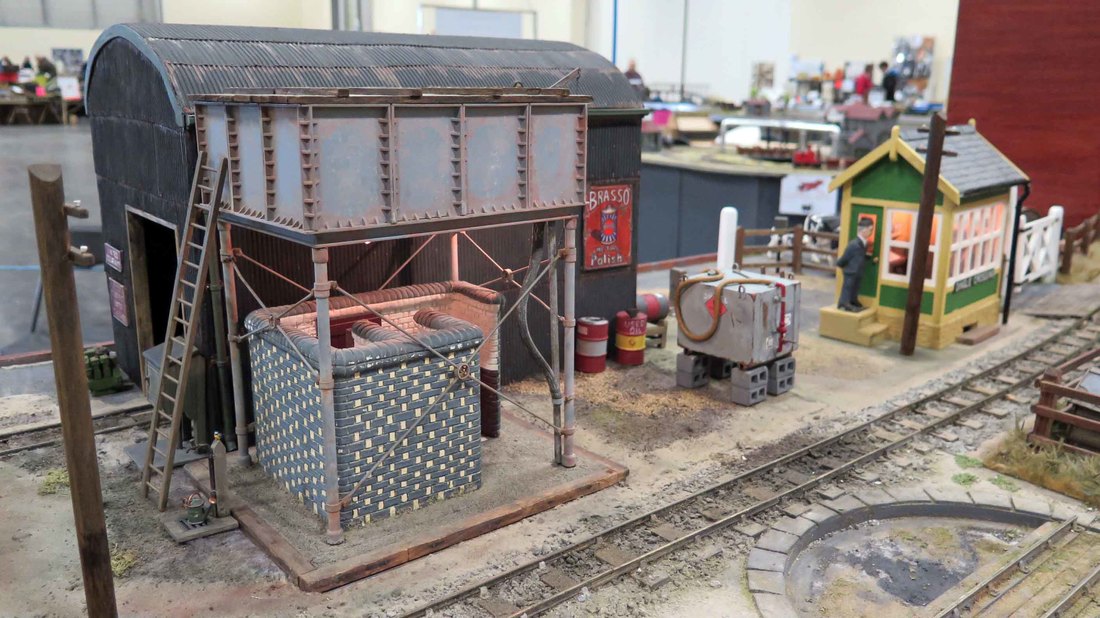 Members were able to operate the Dingle branch at the club exhibition with two operators.  One train would run a shuttle between fiddle yard and station, locos running around in the station. Meanwhile there was sufficient operating possibility for a second locomotive, often a diesel, to shunt the goods shed and cattle dock. There was even the possibility of some exchange of stock from the incoming trains to yard to shunt, both ways. So Dingle Phase 2 was quickly developed, built and successfully exhibited at the Elsecar Garden Railway Show in September 2014.
Over the last two years, Dingle Phase 3 has been developed. With no real space or reason to run trains beyond Dingle Station, operational scope was limited, but this was rectified by building a second fiddle yard at the other end of the branch, enabling trains to be run between the two, and then into and beyond Dingle Station.
PORTMADOC
With the average age of group members creeping steadily upwards, it became apparent in 2015 that there was little, if any, possibility of the full Nant Mawr layout ever again going out to shows.  It was simply beyond the physical capabilities of the group.  Ideas were therefore explored as to the possibility of exhibiting at least a part of it, the most suitable part being the Portmadoc Station area, widely acknowledged as the jewel in the crown of Nant Mawr. Currently, track work is progressing on a scheme to present this section in stand-alone form, the resulting layout to be named ‘Portmadoc’
Firstly, central baseboards (including Dolgoch Viaduct and fiddle yard) on Nant Mawr have been temporarily removed. New baseboards have been constructed to adjoin the existing five boards up to the Cob, Portmadoc and Welshpool (see diagram).  The result is a smaller, much lighter and more manageable 18ft x 15ft rectangular layout.  It is intended that the finished set-up will enable us to operate prototypical FR and WHR trains, using the   correct  locomotives and  rolling stock.   Watch this space for future developments!!!!!
Meanwhile the Nant Mawr layout can be quite quickly restored to full operating size when required, primarily for the monthly running evenings which the club holds for local members of the 16mm Association. 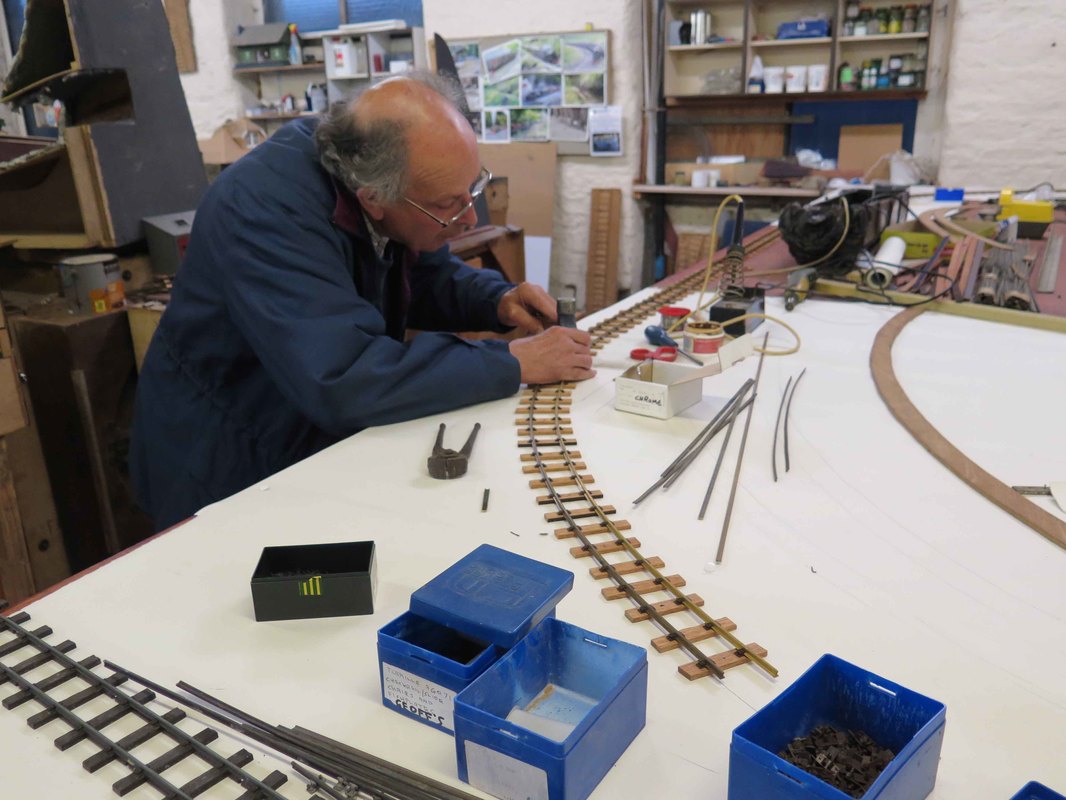 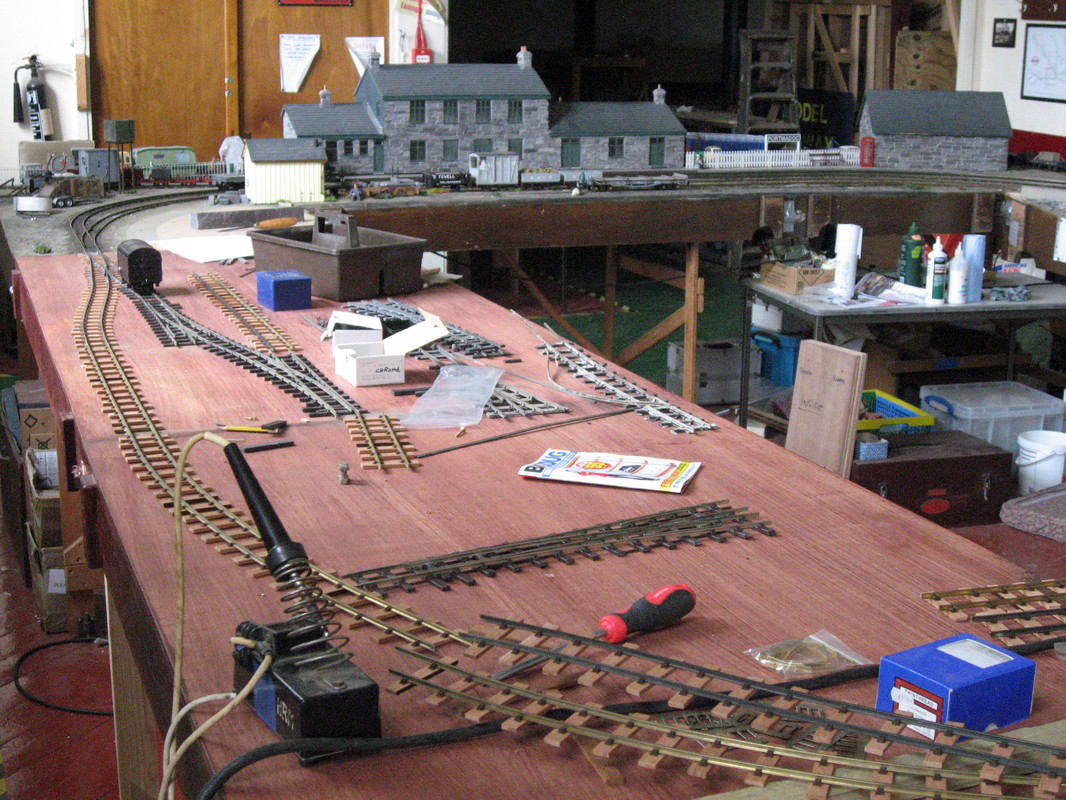