JOIN US ON FACEBOOK or SCROLL DOWN FOR LATEST NEWS

Finally - we have moved!
by Andy Wilkinson
For several years we have been actively looking for a suitable new clubroom because our Milnsbridge home was threatened by redevelopment, but nothing practical and affordable was found until the end of 2019 when the former Bath Mills, a textile factory was found in nearby Lockwood, much nearer Huddersfield town centre. By January 2020 terms were agreed and a lease signed. Work at Bath Mill by the landlord included taking out partitions in the former office space we were taking over, a new heating system and fixing major roof leaks. Then HRM members painted walls, installed new more efficient LED lighting, built a new kitchen and toilets, and fitted out the new Lounge area. Back at Milnsbridge the club’s layouts were dismantled, crated up and made ready for the move. The contents of the extensive Library were boxed. The move was planned for April and by mid-March we had hired a local professional mover. Then BANG ! The first Covid lockdown happened!!!  We were in limbo for over three months. 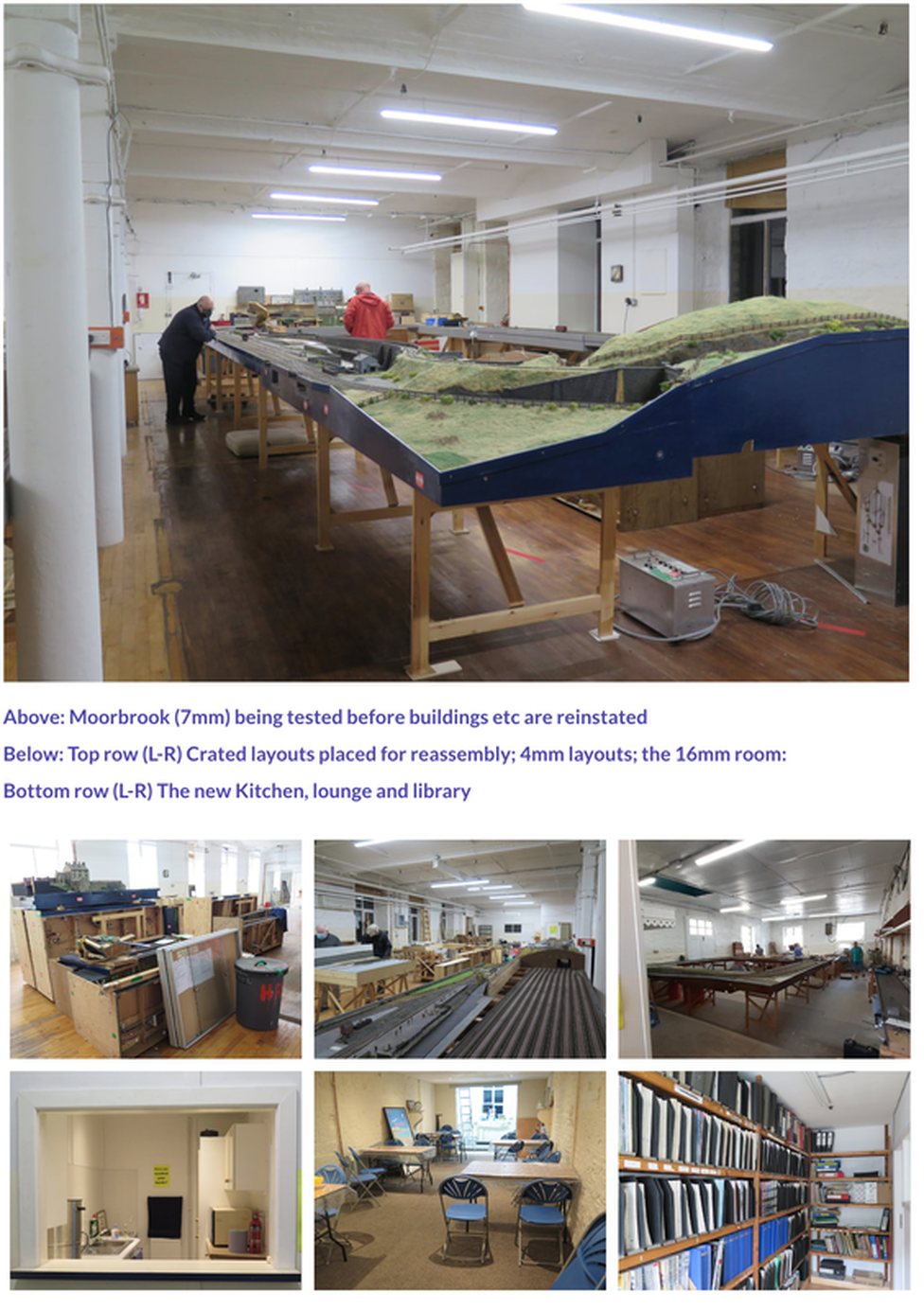 When the lockdown was eased, work at Bath Mills was completed. The 'big move'  finally took place on Friday 14th August. Two vans plus five hired-in ’big lads’, and club members shifted six full van loads of layouts etc. After all the months of frustration, there was a sigh of relief. HRM had actually moved, three extra months later than originally projected, but we were in!
Before the move, a scale floor plan of the new premises had been drawn up to show which layouts went where in the clubrooms. The different crated layouts were left stacked in their allocated spaces at Bath Mills to be assembled later.
Great efforts have been made to make the new clubrooms as Covid compliant as possible. So far, we have only been able to have member only visits. Some layouts have been worked upon and are in various stages of being built back to normal.  Some others are taking the opportunity to do a major makeover.
​The second National Lockdown will end soon and we hope that the post-lockdown regulations will allow us to return as soon as sensible to more normal club activity in our new clubrooms. We look forward to the day when 2020, and ‘Covid’ are perhaps but a distant memory, and we can welcome both existing and new members to help enjoy our big new clubroom in Central Huddersfield. Whether you are an experienced modeller or a complete novice, there is plenty of fun to be had! Come and join us! (WHEN COVID IS OVER)

How to find us

The club normally meets every Thursday evening from 7.30pm, and modelling group and layout working groups meet at other times during the week. There is plenty of on-street parking and the clubrooms have toilets, a kitchen which serves tea, cold drinks and snacks, a library and a fully equipped lounge with video projection facilities.
Come and join us! Contact us to come along for two weeks free with no obligation! We think you'll like what you find.

BUT
​COVID RESTRICTIONS MEAN WE ARE CLOSED AT PRESENT
​WATCH THIS SPACE!

We are a Limited Company, and our Directors are elected by rotation. They are here to help. 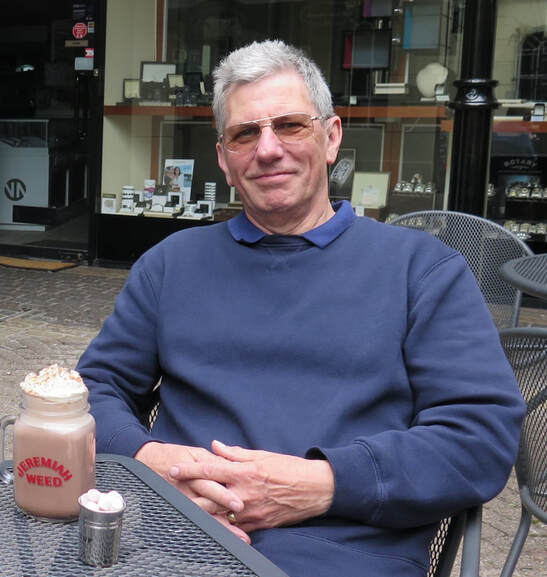 Geoff Munday was a born and bred Mancunian.  In his very active youth, he was a keen member of the Boys Brigade where he learnt amongst other things how to play the bagpipes. He also became a very keen cyclist regularly entering time trials around his home city and the Cheshire Plain.  On leaving grammar school he was an electrical engineering apprentice, working and studying to become, after several years, a Sales Engineer in the industrial installation sector of electric power supply with NORWEB (North West Electricity Board). During this time, he met and married Edie, originally from Cumbria, then working as a nurse in Manchester. They married in 1971 and a son, Neil, was born. In 1978 the family moved to Chadderton near Oldham where they had five happy years and a daughter, Diane, was born in 1980.
​Successfully seeking promotion within the power industry, in 1983 Geoff moved over the Pennines to work for YEB (Yorkshire Electricity Board) based around the Leeds and Bradford areas, settling to live in Huddersfield.
Geoff had started model making aged around 7 or 8 drawn to his father’s love of putting ships in bottles, later moving on to ‘bread and butter construction’ of clipper ships. Making models was a love that stayed with him all his life.  He also had a keen interest in trams, large and small.  To help the family settle into their new surroundings in Yorkshire, weekends were often spent visiting shows, exhibitions and local attractions.  One such visit in 1984 was to the Huddersfield Railway Modellers Annual Model Railway Exhibition in Slaithwaite. On display was an indoor 16mm to the foot scale / 32mm gauge railway layout, comprising of a simple circle with trains operating hauled by little live-steam Mamod locomotives. These being quite novel at the time created a lot of interest and displayed some potential for modelling prototype narrow gauge railways.  The locomotives had already been improved by their HRM owners by modifying them for gas firing and radio control.  The spark was lit for Geoff and Neil!  They were both hooked joining the HRM club the following Thursday evening.  Geoff’s membership continued unbroken from that time on.
Geoff brought his management skills to HRM and soon became a valued club member, becoming a leading light amongst others driving the club forward across all the layout groups. He was elected to join the Committee holding various roles over the years – Chairman, Catering Manager and Clubroom Manager and when the club became a Limited Company, he served as a Company Director up until very recent times.  He played a crucial role over a decade ago in leading efforts to find and move the club from Meltham to Milnsbridge into new clubrooms. More recently, until mid-2019, he oversaw the further management of the most recent move to new clubrooms at Bath Mill in Lockwood, Huddersfield.  The HRM club and its members simply owe him a great deal and without him it would not be in the strong position it is in today.
As interest in 16mm scale modelling grew, in 1985 Geoff joined the Association of 16mm Narrow Gauge Modellers, expanding his collection of locomotives and building rolling stock to run on what was the then the developing ‘North Meltham Light Railway’ layout, and later the ‘Nant Mawr’, ’Dingle’ and ‘Portmadoc’ 16mm club layouts.  He also constructed a railway in his garden – ‘The Netherton Branch’ and regularly participated in garden railway meets with many friends within the Yorkshire 16mm Group. Some beautiful precisely modelled North Wales Narrow Gauge Railway Co. coaches he built were entered and won him prizes at the national Model Engineering Exhibition.  He also entered and often won modelling competitions at the Annual 16mm Association AGM and model show held in the Midlands.  With his natural flair for modelling clearly demonstrating his fine skills, he helped build a national reputation for others to aspire to. His most recent success was a live-steam model of a Ffestiniog Railway Double Fairlie locomotive named ‘Livingston Thompson’.  A Double Fairlie is not technically the easiest locomotive to build in this scale - some have tried, many have failed.  Geoff had some sound ideas particularly on the boiler design and gas firing that he proved to work well.  The finished model is, as expected, built to a very high standard and simply works and runs as well as it looks!
In the early 1990’s, Geoff was made an offer he couldn’t refuse to take early retirement. Great interest in the 16mm NG scale of railway modelling was rapidly expanding. Geoff recognised that what was lacking was a specialist ‘locomotive liner’ among the various services supporting the hobby at that time. So, Geoff started his ‘Lightline’ business.  In his very professional way, he borrowed a couple of club members engines to line-out and they came back a real delight to view and watch operate. Over the years Geoff has lined many of his fellow HRM members’ locomotives and they look as good today as when he completed them.   Geoff, ably supported by Edie, became very well-known and popular on the garden railway show circuit through their friendly ‘Lightline’ exhibition stand.  He attracted a well-respected reputation for ‘excellence’ with his work. His box of photographs of completed lining-out jobs, alongside his comprehensive website, became a common reference point for many a 16mm modeller. He certainly assisted many garden railway enthusiasts to achieve their model railway dreams, providing a service to add that final touch of lining class to many a locomotive. Look around on 16mm garden railways and at shows today and his work can be seen.  Last year, when he reluctantly had to stop lining and cease trading, he had almost completed the lining 3000 engines!
What a legacy he leaves behind in garden railway modelling!
​​This document was prepared by  Rodger Schofield, Robert Groom and Andy Wilkinson of Huddersfield Railway Modellers 16mm NG Group, with additions and corrections by Geoff’s family.
Huddersfield Railway Modellers